U.N. experts lent their weight to allegations that Saudi Arabia’s crown prince hacked the cellphone of Jeff Bezos, owner of The Washington Post, to “influence, if not silence,” its reporting.

BEIRUT, Lebanon — United Nations experts broadened the inquiry into Saudi Arabia’s efforts to squelch criticism on Wednesday, accusing its crown prince of personally hacking the cellphone of Jeff Bezos, the billionaire owner of The Washington Post, to “influence, if not silence” the newspaper’s critical coverage of the kingdom.

The accusations, by two prominent United Nations rights experts, threatened to hamper efforts by Crown Prince Mohammed bin Salman to shake off the stigma of the 2018 murder and dismemberment of a Washington Post columnist by Saudi agents in Istanbul.

The experts did not directly investigate the hack, which The New York Times could not independently verify. But giving their imprimatur to an outside investigation bolstered criticism of the kingdom’s covert efforts to silence critical voices and widened the possibilities of who could be targeted.

“The hacking of Jeff Bezos is in a different league,” said Agnes Callamard, one of the United Nations experts. “He is not a Saudi citizen. He is a person of strategic interest, and his hacking appears to have been driven by his ownership of The Washington Post.”

According to a statement by the two experts on Wednesday, Mr. Bezos, the chief executive of Amazon, received an encrypted video from a WhatsApp account belonging to Prince Mohammed that was loaded with digital spyware. By watching the video, Mr. Bezos enabled surveillance of his cellphone starting in May 2018. Ms. Callamard said that the surveillance was believed to have continued for nine months, until February 2019.

During his rise, Prince Mohammed, a son of the Saudi king, has pushed to open Saudi society by letting women drive and expanding entertainment opportunities. But he also has overseen a wide-ranging crackdown on dissidents at home and abroad.

In recent years, technology researchers and human rights groups have documented cases of operators who appear to be working for Saudi Arabia infiltrating the communications devices of well-known Saudi dissidents and manipulating social media in the kingdom to amplify voices praising Prince Mohammed and drown out his critics.

But targeting the cellphone of an American citizen who is one of the world’s richest businessmen would be a clear escalation.

The Saudi Embassy in Washington on Wednesday called the idea that the kingdom had hacked Mr. Bezos’ cellphone “absurd” and did not respond to a request for comment about the hacking of Saudi dissidents.

The hacking of Mr. Bezos is particularly sensitive because of his ownership of The Post, which had published coverage critical of the kingdom and had retained Jamal Khashoggi, a dissident Saudi writer, as a regular columnist. Mr. Khashoggi had fled Saudi Arabia for the United States and often criticized Prince Mohammed in his columns.

Six months after the hack of Mr. Bezos’ phone, Mr. Khashoggi was killed by Saudi agents in Istanbul, where he had gone to obtain papers needed to marry his Turkish fiancée. The Central Intelligence Agency has concluded that Prince Mohammed most likely ordered the murder. He and other Saudi officials deny he played a role.

Last year, Mr. Bezos accused American Media Inc., the tabloid publisher, of “extortion and blackmail” after it exposed his extramarital affair with Lauren Sanchez and threatened to publish graphic photos if he did not publicly state that reporting by The National Enquirer was not motivated by political concerns.

Mr. Bezos suggested that the company had been doing the bidding of Saudi Arabia. The Enquirer’s parent company has said Ms. Sanchez’s brother, Michael, was the sole source of the texts and intimate photos it acquired.

In their statement on Wednesday, the United Nations experts also accused Saudi Arabia of starting vast social media campaigns to tar the image of Mr. Bezos after the killing of Mr. Khashoggi.

“At a time when Saudi Arabia was supposedly investigating the killing of Mr. Khashoggi, and prosecuting those it deemed responsible, it was clandestinely waging a massive online campaign against Mr. Bezos and Amazon targeting him principally as the owner of The Washington Post,” the experts said.

Mr. Bezos did not comment on the hack, but posted a photo of himself on Twitter on Wednesday standing beside Mr. Khashoggi’s Turkish fiancée and with his hand resting on a stone bearing Mr. Khashoggi’s name. The caption read, “#Jamal.” 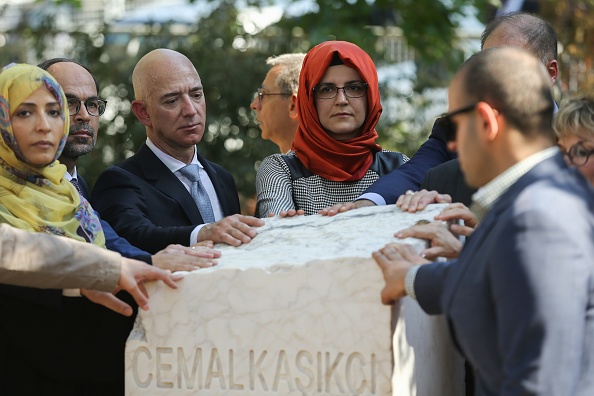 Saudi officials have not revealed the whereabouts of Mr. Khashoggi’s remains.

The hack of Mr. Bezos’ phone came at the start of a two-month period in mid-2018 when at least four Saudi dissidents living abroad reported having their devices hacked with technologies similar to that found to have been deployed against Mr. Bezos.

They included Omar Abdulaziz, a dissident in Canada with a large social media following; an unidentified researcher for Amnesty International; Yahya Assiri, who runs a human rights monitor in London; and Ghanem al-Masarir, who hosts a YouTube show from Britain that skewers the Saudi leadership.

The United Nations experts said that, taken together, the cases pointed to “a pattern of targeted surveillance of perceived opponents and those of broader strategic importance to the Saudi authorities.”

Mr. al-Masarir, who said his two cellphones had been hacked in June 2018, said by phone on Wednesday that the kingdom used hacking as a low-cost way to keep an eye on people it disliked.

It is a way to spy on you all the time without sending 1,000 people to follow you around,” he said. “Instead, they are in your phone and they hear you and see you and know who you are with.”

The Saudi Embassy in Washington, in denying responsibility for the hacking of Mr. Bezos’ phone, called for an investigation but did not say who should carry it out.

The hacking accusations add to the pressures on Prince Mohammed — essentially accusing him of new criminality while the kingdom is trying to overcome the negative news coverage of its nearly five-year-old military intervention in Yemen, its blockade of Qatar, its short-lived holding of the prime minister of Lebanon in 2017 and the killing of Mr. Khashoggi.

The awkwardness has been compounded by Saudi Arabia’s assumption of the presidency of the Group of 20 and the expectation it will host the group’s summit meeting this year, opening the kingdom’s doors to leaders of the world’s most developed countries.

The hacking could also complicate relations between the Saudi government and the Trump administration, which has stood by Prince Mohammed despite an international outcry over Mr. Khashoggi’s killing and the assessment by Mr. Trump’s own intelligence services that the crown prince was most likely involved.

The United Nations experts called on the United States and “other relevant authorities” to immediately investigate the hack of Mr. Bezos’ phone.

Their statement cited a 2019 forensic analysis of Mr. Bezos’ phone that assessed with “medium to high confidence” that his phone had been infiltrated on May 1, 2018, via an MP4 video file sent from a WhatsApp account used personally by the Saudi crown prince. The report, which was reviewed by The New York Times, indicated that Mr. Bezos continued to receive messages from the crown prince’s WhatsApp account after Mr. Khashoggi’s death.

The report was carried out at Mr. Bezos’ request by the business advisory firm FTI Consulting and given to the United Nations experts by Mr. Bezos’ associates for their assessment. Messages sent by the crown prince’s account throughout 2018 suggested that he had intimate knowledge of Mr. Bezos’ private life.

On Nov. 8, 2018, the report said, Mr. Bezos received a message from the account that included a single photo of a woman who resembled Ms. Sanchez. The photo was captioned, “Arguing with a woman is like reading the software license agreement. In the end you have to ignore everything and click I agree.”

At the time, Mr. Bezos and his wife were discussing a divorce, which would have been apparent to someone reading his text messages.

Mr. Bezos and Prince Mohammed, the report said, exchanged phone numbers at a dinner in Los Angeles in April 2018. The crown prince initiated a messaging conversation with Mr. Bezos that same day over WhatsApp.